Cataract Canyon on the Colorado River is one of those whitewater experiences that can be extremely different from year to year depending on the water level. Changes in the character of a rapid is one of the things that draws us back to the same river many times over. 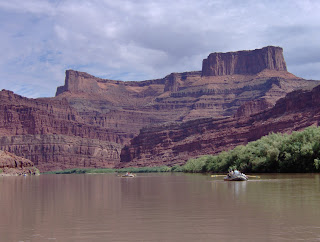 Cataract Canyon has some of the most extreme differences in volume of all the western big water rivers because the dams that regulate the flow come from both the Green River and the Colorado River many miles upstream before they reach the confluence of the Green and Colorado, just a few miles above the start of Cataract Canyon. This combination of two large rivers often means a lot of water during the spring runoff. 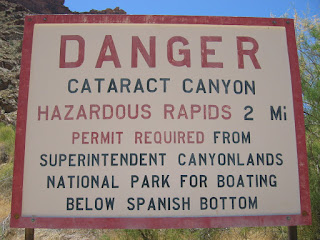 For those of us who prefer an oar-powered experience instead of using an outboard motor, a high water run through Cataract Canyon (Cat for short) borders on insanity! 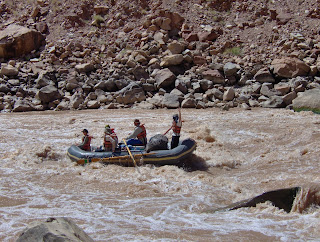 Add to that some “old school” equipment like bucket boats instead of self-bailers, and the running the ‘big stuff’ in high water is best described as an almost “out of control” experience.

The reason it becomes extremely difficult is a bucket boat will fill with water in the first wave in a big rapid and then the raft is just too heavy to maneuver by one person at the oars. In a bucket boat, the passengers man 5 gallon buckets to scoop out the water, usually after running the rapid is done.
This becomes an exceptional challenge in Cat because the most challenging rapids, Big Drop One, Two, and Three come in quick succession without much time to bail out a bucket boat before the next Big Drop.

A raft that is too heavy with water to maneuver is most likely going to be drawn into a massive hole in Big Drop Three, affectionately called Satan’s Gut, where the likelihood of a flip is almost guaranteed in a high water run.

In contrast, in a low water run when scouting Big Drop Three it becomes very easy to see what creates Satan’s Gut. There is a huge rock that becomes exposed in low water called Big Mossy.
At medium river flows Big Mossy is just a section of the rapid to be avoided by a nice route just right of center at the top of the rapid. 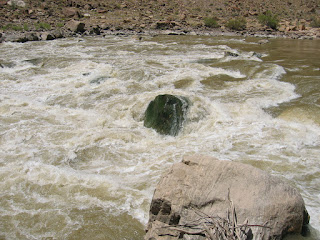 In low water, the right of center route is too rocky to make right of center an option and the only viable route is a small gap in the rocky sections that cover most of the river and to get uncomfortably close to Big Mossy as it looms large out of the water. 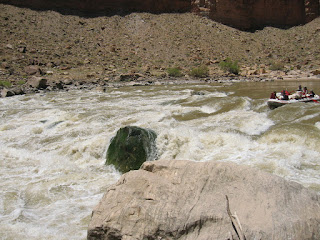 As I studied Big Drop Three to figure out a low water route it occurred to me that Big Mossy has been around for a long, long time. And that it will be there for a long time after I make my exit from Planet Earth.

But the river is persistent. And that continued persistence will wear down Big Mossy, slowly from our point of view, but every minute the process of wearing down Big Mossy continues.

Frequently when we set really challenging and optimistic goals, we only recognize the resistance to the process and wonder if we will ever succeed with big goals.

In some cases, we may discover the time needed to accomplish the large ambitious goal is a price we are no longer willing to pay. That’s not the same as giving up because it’s hard and we are just not exercising enough persistence.

I like Seth Godin’s perspective that sometimes we find we are proverbially in a cul-de-sac and there isn’t any way through to completion. Compared to a dip in the road that just requires more effort on the uphill side of the dip. 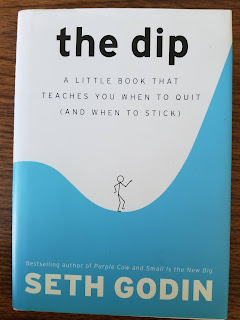 When we find ourselves in the “dip” we simply need to recognize more time and effort is needed to maintain our progress and break down the goal into smaller incremental steps to be able to see, like the river, we just need to persist for the amount of time required to achieve the big goal.

Most of life’s best rewards come from slowly and systematically (think persistence) making small amounts of progress towards the completion of our goals. We just don’t get to dynamite every big obstacle in our “river of life” as a quick fix.

Bonus Idea: Who we become in the process of achieving challenging goals is often of more value and longer lasting than the actual completion and reward received from the goal.

For more information on personalized mentoring and coaching programs, send me an email to chris@dtesuccess.com. I coach the person who wants time and financial freedom, and to live a life of purpose and meaning.

I guide you through a process where you develop a customized plan to become the very best version of yourself. A plan to help you stop wasting precious time and remove the uncertainty in your life. And replace it with clarity and vision.

Email chris@dtesuccess.com to schedule your free coaching session to create clarity and vision now!
Posted by Chris LeCheminant at 1:52 PM