In a previous blog I mention when I first learned to row, I wasn’t very old or very strong so I had to learn how to work with the river instead of fight it with my strength.  And since learning how to row I’ve had the awesome opportunity to run most of the very best rivers in the western United States.  In all these excellent rafting experiences I have found a few places where there are some legendary eddies.

An eddy is a section of a river near the bank that reverses course and flows upstream. Usually found just below or along a rapid. I consider eddies on a river to be like the brakes that allow us to stop or slow down if needed. I once had a coaching client who said they just felt like they were spinning in circles and getting nowhere with their business and investments. I immediately pictured in my mind a raft cycling around and around in one of these legendary eddies and unable to get out.

One of those legendary eddies is affectionately called “Forever Eddy.” It’s found near the end of a really wild rapid in Grand Canyon called Granite Rapid. 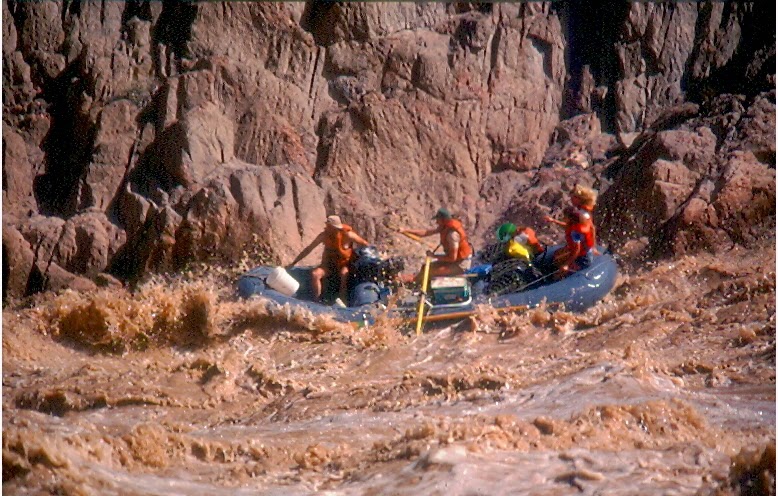 This rapid forces the guide to run the right side of the rapid along a sheer cliff into some big waves. 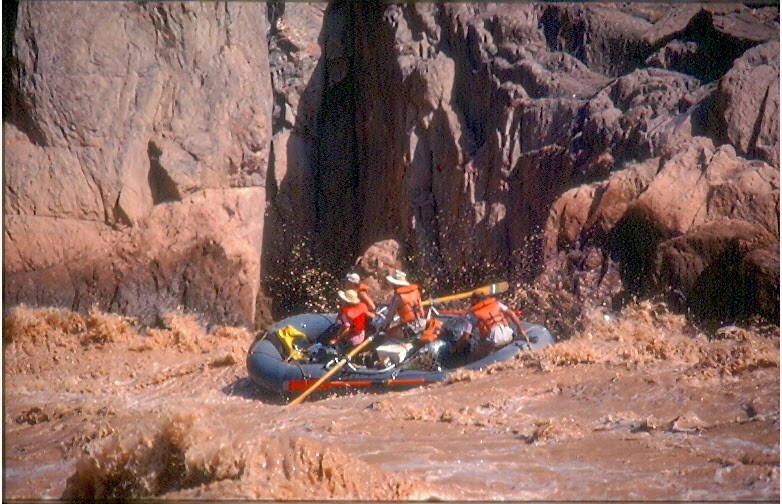 Then the guide must attempt to move towards the middle of the river through big waves to avoid Forever Eddy which is found on the right hand side of the river about 3/4th of the way through the rapid. If the raft ends up in Forever Eddy it can take many attempts to get back out into the main current. 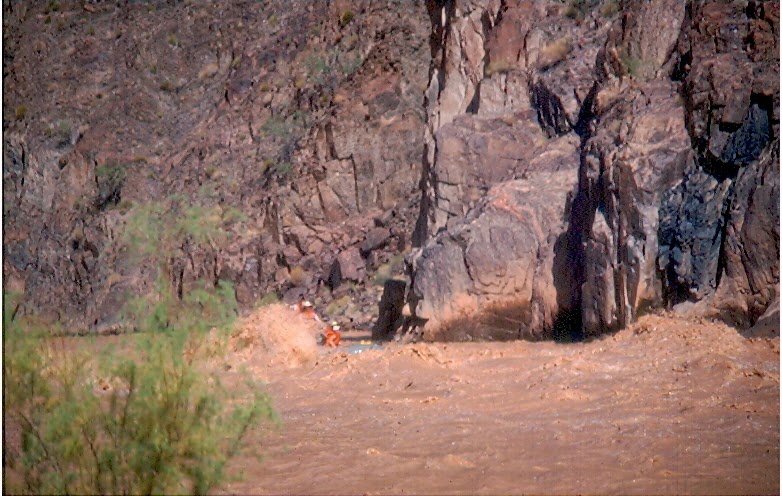 Forever Eddy shows up right after some pretty big waves as you can see in this photo. Just past the cliff and this huge wave, the raft comes very close to the edge of Forever Eddy. The tail waves in the rapid tend to push the raft into the eddy if you the guide isn't trying hard to keep to the center of the river.

Fortunately, I’ve been lucky not to get caught in Forever Eddy. In my 2014 run it was close. But whenever I find myself working my way back out of a particularly strong eddy there is a certain technique I’ve found that really helps raise my chances of getting out on the first attempt.

First, I allow the boat to drift upstream,  to the top of the eddy as far as I can to give me more distance to try and row back out into the main current before being forced back into the eddy.

Second, I position the back of the boat pointing slightly upstream, knowing that when the boat hits the main current going the opposite direction of the eddy it will push the raft downstream and start pivoting in the wrong direction. If you allow the boat to pivot this way it will usually get pushed right back into the eddy.
Third, just at the moment the back of the boat starts to hit the main current going in the opposite direction of the eddy, I put the upstream oar handle under my leg and grab the downstream oar with both hands. This way I have twice as much pull on the downstream oar which usually keeps the boat from pivoting around and getting pushed back into the eddy.

In the legendary eddies this technique may not always work. I’ve heard stories of rafting groups dismantling their raft and climbing up the cliff and carrying the boat downstream to get out of the “Room of Doom” in Westwater Canyon on the upper Colorado River in eastern Utah. Check out this You Tube link to see how difficult a "keeper eddy" can be to escape. Also consider if the outcome could have been different if as soon as he hit the main current he used two hands to pull on the downstream oar.

If we find ourselves in a situation where we cannot get out under our own power, we’re going to need to get help and no longer rely on our own strength and technique to get out of a “keeper eddy.”

So I explained the challenge of a ‘keeper eddy’ to my client and then asked them if there was anything they felt like they needed to drop for now (putting one oar handle under your leg and put all your effort into one oar only) and if their situation was a lack of focus. (Focus can be an acronym that stands for Follow One Course Until Successful, by the way.) They felt like there were some things that could and should be dropped.

Then I asked if there was anything they felt was simply too much and it was time to call for extra help from outside their regular circle of people.  And we discovered there were some opportunities there as well, particularly with their real estate investments.

Usually on a river it’s not a good thing to fight the river. Normally it is better to use the current to your advantage, using both oars. Because in most situations, using only one oar means being out of control.
But there ARE occasions when fighting hard and using only one oar is exactly what must be done to free ourselves from the influence of the current if we’re stuck in a powerful eddy. 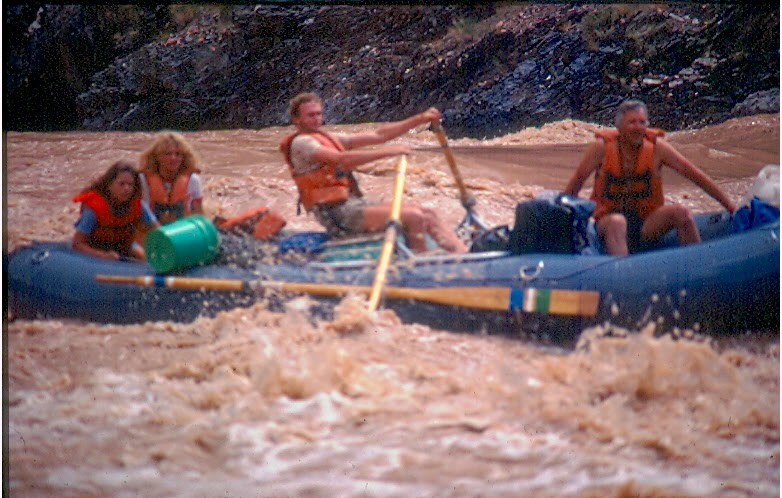 Life is often the same. Usually, we can have multiple projects and activities going on at the same time and usually create the results we want. But sometimes we need to drop everything else and focus all of our effort and attention on one thing and fight for it!

In parenting, we often refer to this as choosing our battles. Sometimes we don’t fight, and sometimes we fight hard. When we choose wisely the best course of action, we can “do our hearts so good.” Thanks, Kenny! 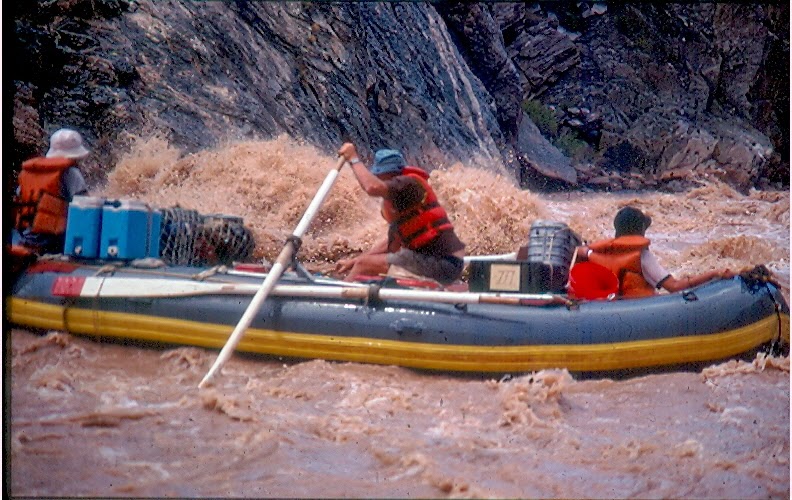 Posted by Chris LeCheminant at 10:18 PM No comments: